Posters on the wall scribbled full with names and wording that we don't understand. Young people sitting on couches and around tables talking in a language we don't follow. It seems they are having a serious discussion, but suddenly there's hard laughter; so maybe not a discussion. A group gathers around and sits on their knee's and suddenly starts counting so loud that all conversations stop; a game of turnaround hide and seek is starting and someone runs away to hide, later to be found be 40 wild Norwegians. It is an evening at the Natur og Ungdom annual meeting, or in Norwegian: Landsmøte. 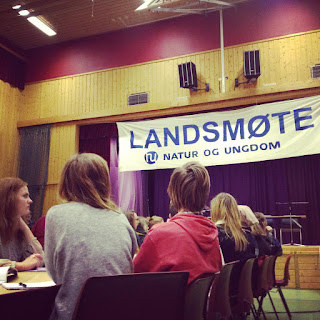 Once a year members of Nature and Youth (NU; Young Friends of the Earth Norway) get together for a five day meeting to discuss, policies, organisational issues and their focus of the year to come. And what a year...

2013 will the year of the elections and of Lofoten. The islands of Lofoten are one of the most beautiful places in Norway – so we've been told - but is also threatened by industry that wants to start drilling for oil. This would be a disaster for the area, threatening vulnerable marine life, local fisheries. Furthermore, new extraction of fossil fuels will disastrously deepen the climate crisis. So many reasons to be fighting for this area. Something that all members of NU are doing with astonishing passion, and that is needed to get politicians to promise not to allow the drilling.

The amazing thing about this crowd is their commitment to the organisation, with great dedication and patience people discuss with each other. To create a mental image for you: picture a gym, filled with banners, 200 people are standing, singing an environmental battle song, when it ends everybody cheers and sits down. A young guy with a bow tie (bow ties are cool) walks up to the pulpit while some in the gym take up their knitting and others are drawing dragons. He speaks with passion about international co-operation and about Young Friends of the Earth Europe being the most important ally (Jazz hands!). He wants local groups to know more about the activities of the network. Of course we only learn this moments later when Oskar Njaa translates what Bow tie said whilst delegates vote for his proposal to learn more about YFoEE. The Landsmøte of Natur og Ungdom: an amazing, inspiring and puzzling place to be. Amazing for what the organisation does, inspiring because of the people who are working with heart and soul to create a more sustainable place out of Norway and the world. Also puzzling as they do all this in Norwegian, an incredibly difficult language for two Dutch people.

A guest blog by Thessa Meijlis and Job van den Assem, who were welcomed by NU as friends from the Young Friends of the Earth Europe network.